Building On A Grandmother's Example

Home Building On A Grandmother's Example

Building On A Grandmother's Example

Camille Ponce '14 MSLP was a mission-minded student who spearheaded a fundraising drive for Eagle Ridge School in Carbon Cliff, Illinois, while serving a clinical rotation in the St. Ambrose University Master of Speech-Language Pathology program.

Her efforts were featured in a PBS documentary about one of the most impoverished school districts in the country.

Ponce has never let go of her mission-mindedness. Instead she's carried it forward into her life and career.

Ponce is the lead speech therapist for Northwestern Medicine at Marianjoy Rehabilitation Hospital in Chicago, working within a skilled nursing facility. As part of her commitment to help people better communicate in their world, Ponce provides therapy in multiple languages: English, Spanish and Tagalog.

Next summer, she plans to travel to Haiti or the Dominican Republic with a therapy mission group and provide services to children.

Ponce volunteers with Feed My Starving Children. Her support of GiGi's Playhouse-a nationwide nonprofit organization she worked with while at St. Ambrose-continues today. She also served as a private, Filipino-based speech therapist in a school setting, and led a program that paired each student with a mentor who helped children develop social communication skills.

Ponce's mission is not just to serve, but to always serve with compassion and respect, something stressed in all St. Ambrose health science programs.

She said she often works with SLP graduate students and encourages them to put themselves in the shoes of the person they are treating, or the parents of the child. She encourages future professionals to be compassionate and express humanity in their work, and models it in her own-much like her grandmother.

Growing up in the Philippines, Ponce said she spent a lot of time with her grandmother, a university professor who went far beyond instructing students from Hong Kong, Vietnam and other countries on how to speak new languages.

Her grandmother invited students into her home to share a meal, gave them tours of the region, and invited them to restaurants and events so they could fully and authentically experience the community and culture.

Ponce absorbed her grandmother's enthusiasm for helping others and witnessed the rewards of kindness, including an expanded worldview and appreciation of other people.

"I learned love and compassion for other cultures and community through her," Ponce said. "And so, I've never thought of it as a job to go above and beyond for other people." 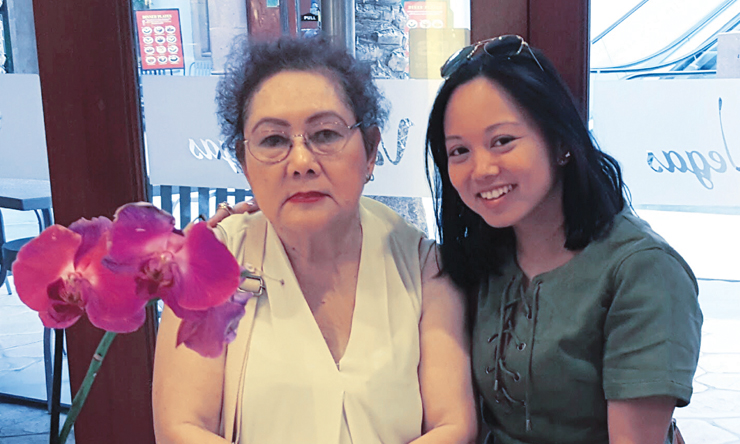