For the past 12 years, the College of Arts and Sciences has produced an academic year's worth of lectures, exhibits, art, and performances revolving around a central theme.

This year's theme of War and Peace is the only one to tackle two issues simultaneously.

Philosophy professor Tadd Ruetenik, PhD, is the series coordinator and proposed the 2019-20 theme due to the University's long history of social justice activism and because the United States still is fighting a war that began shortly after Sept. 11, 2001.

"With the U.S. in a seemingly perpetual state of war, it seemed appropriate that SAU activate its Catholic conscience," he said, "the way it follows its conscience in many other social justice topics."

Several past project themes have focused on social justice: labor practices (2010), racial justice (2012), climate change (2013), gender (2014), and the broad theme of Justice (2015). While many times the themes include an academic slant, Ruetenik said it was important that this theme incorporate non-academic perspectives.

"In the past, we've had outstanding academic speakers," he said. "But with at least two events this year, we are bringing non-academics to campus. These people are – if it is appropriate to use a war metaphor – in the trenches of the battle for peace "

Jodie Evans is one of them. She is the co-founder of CODEPINK, "a women-led grassroots organization working to end U.S. wars and militarism, support peace and human rights initiatives, and redirect our tax dollars into healthcare, education, green jobs and other life-affirming programs."1

"Jodie is part of a brave attempt to promote critical awareness when it is needed the most, in particular, immediately after acts of political violence," Ruetenik said. CODEPINK condemns all acts of war and works for peace not only in this country, but also for people living in war-ravaged countries.

Evans will speak Nov. 13 at 7 p.m. as the Baecke Endowment for the Humanities lecturer.

In the spring, members of Veterans for Peace will speak as part of the Wilber Symposium on the Christian Tradition and Nonviolence, Mar. 19 at 7 p.m.

"For better or worse," Ruetenik said, "I think one of the results of decades of war is that the soldier takes on a value that becomes almost mythical. This is why I take especially seriously the topic of the Veterans for Peace lecture "If You Want to Thank Us, Work for Peace."

Visit the War and Peace website for a complete listing of events. 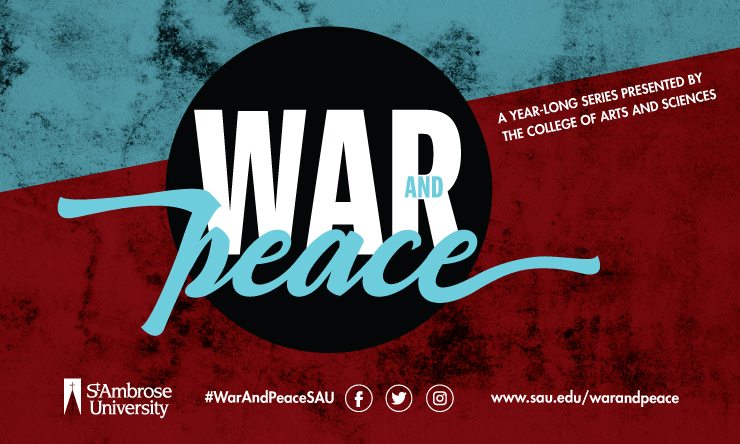