To say Anna Badamo's time at St. Ambrose can be described with a Facebook-style thumbs-up would be a huge understatement.

Her parents, John and Terri Badamo, would agree. In fact, in the past four years, Terri has used the 'Like' button and comment box so much, she has earned the recognition of SAU's biggest Facebook fan.

Based on Terri's own words, "Like" is an understatement.

"St. Ambrose has made a great impression on Anna and has made her ready for the next step in her life. It has been a wonderful experience for her and her family. She's loved it, and we've loved it," Terri said.

On May 12, at the St. Ambrose University Spring Commencement Ceremony, Anna will be awarded a Bachelor of Arts degree in English and a second degree in Psychology. She had been accepted into the Master of Educational Leadership and Policy Analysis program at the University of Wisconsin in Madison, and is planning a career in higher education student affairs.

That wasn't her plan when she came to St. Ambrose as a first-year student from Quincy, Ill. Anna chose to major in Psychology because she wanted a career working with people, perhaps counseling adolescents. "As I got more involved on campus I started working in a lot of student engagement activities, and I realized I like working in higher education," she said.

Anna was a new student seminar peer assistant for three years; a STAR (Students Trained as Role Models) during two summer orientation seasons; a writing tutor in the Student Success Center; a library circulation assistant for four years; and was on the cheerleading squad for two years. She also helped refugee children learn English and studied abroad in Italy.

Those experiences, combined with a psychology education that prepared her to build effective communities and an English major that fits perfectly into higher education, led her to a new career path. 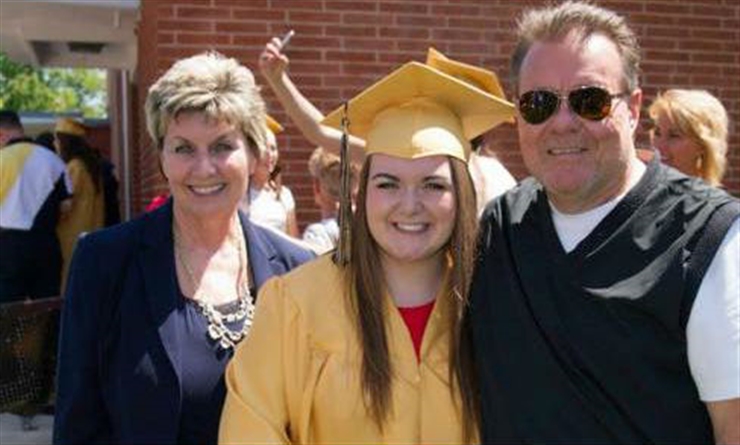 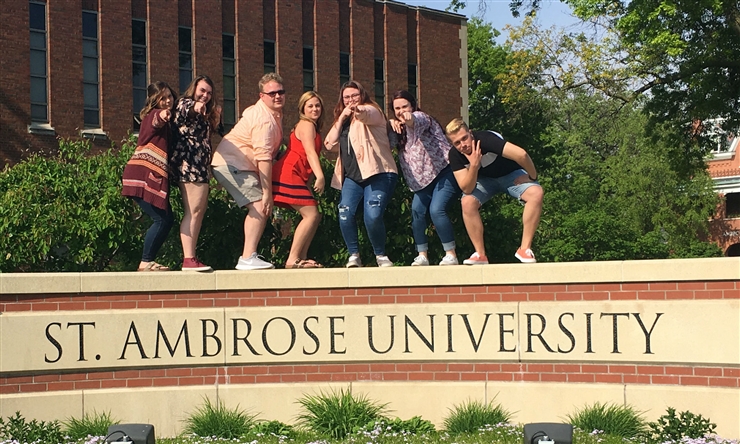 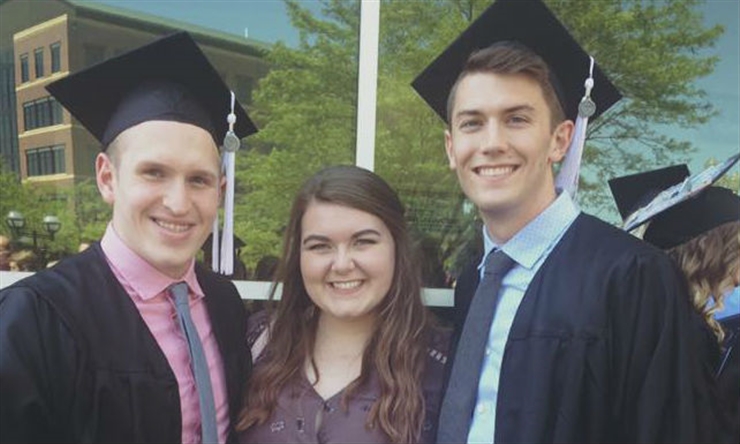 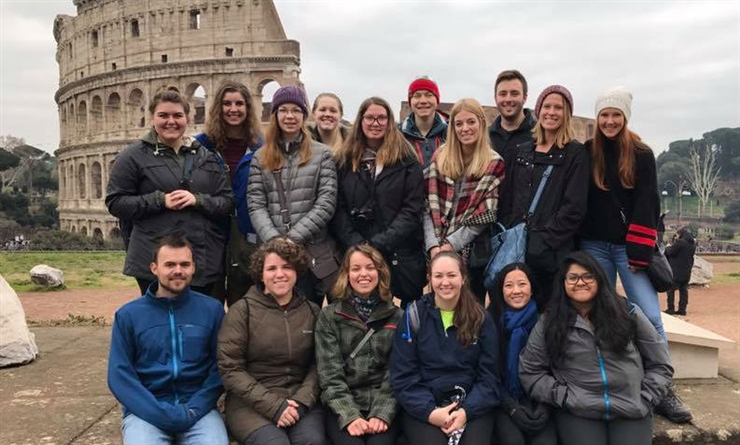 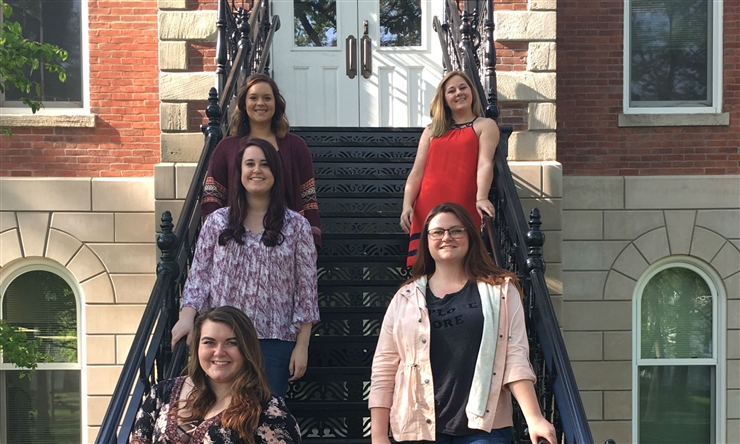 At St. Ambrose, Anna discovered how much she can accomplish academically. "I've always enjoyed school and when I came to St. Ambrose, I found I was more capable than I thought I was. My professors and supervisors really pushed me, told me I could do more, pushed me to think deeper," she said.

At St. Ambrose, Anna also discovered how much she can accomplish academically. "I've always enjoyed school and when I came to St. Ambrose, I found I was more capable than I thought I was. My professors and supervisors really pushed me, told me I could do more, pushed me to think deeper," she said.

Anna said the same about her mom, too. "She's always been very involved and my biggest fan. When I came to St. Ambrose, she was happy I was within a few hours of home but it was hard for her knowing she wasn't going to see or talk to me as often," she said.

"Then, she found Facebook and learned she could follow all these pages," including Anna and her friends, SAU, the library, the cheerleading squad, and more.

"My mom visits campus a lot, and all of my friends have met her and are comfortable being friends with her on social media. It is important to my mom to feel involved and connected with what going on with me, and it has been great to have her so involved in my time here," Anna said.

"She is not only my biggest supporter, my No. 1 fan, she makes sure all of my friends and roommates also feel supported," Anna continued. "If I get a care package from my mom, she includes things in the box for my friends and roommates. If someone is having a difficult time and needs a confidence boost, I'll tell them to add my mom as a Facebook friend; she'll be there for you."

Facebook has provided Terri a platform between campus visits to stay connected and support Anna, her education, opportunities, and successes; to support her daughter's friends and roommates; and support the university and the many programs that have provided Anna with a second family that is worth so much more than a ‘Like.'

Anna said it is not unusual for someone on campus to ask her if Terri is her mom, then share a story about how she posted a positive comment about something they did or achieved. After Anna stopped cheerleading, Terri continued to post messages of "good luck" to the team. And Terri takes every opportunity to comment on things going on at the library.

"Anna and I are very close, and she's always been very accepting of me being involved," Terri said. "At first, I was leery of social media but realized it is wonderful. I love SAU Facebook, and I can keep up with things happening on campus."

"She is not only my biggest supporter and my No. 1 fan, but she makes sure all of my friends and roommates also feel supported. If I get a care package from my mom, she includes things in the box for my friends and roommates. If someone is having a difficult time and needs a confidence boost, I’ll tell them to add my mom as a Facebook friend, she’ll be there for you."

Anna said her mother's involvement and constant presence was important and so appreciated. At times, Anna would feel overwhelmed by all she needed to get done, "and I would get a care package from my mom, and it was such a boost to keep me going. There is so much I knew I couldn't do, or wouldn't do, without support from my mom. She is there for me 100 percent."

Terri is excited for Anna to enter graduate school, but it means she will be six hours away instead of three. There will be fewer visits, and Anna has warned her mom that she will be very involved in her graduate studies and have less time for activities and hanging out with friends: i.e., there will less for Terri to follow, post, and ‘Like' on Facebook.

But Terri will continue to support her daughter's educational, and personal, growth and success — whether that is through social media or other avenues.

"Anna has really grown in the past four years" Terri said. "She wanted that college experience and she did really well with it. Throughout her time at SAU she's told us, ‘I've found my spot. I'd never give up St. Ambrose.' That is a great thing for her mom and dad hear. We knew our girl was happy and safe and enjoying her college years."

"What I am most proud of Anna is that she's gotten so involved, reached out, and done so many different things. She's accepted anything and everything SAU offered her: mentoring, tutoring, working in the library. She's done everything," Terri said.

Anna agrees her Ambrosian experience had a life-changing impact. "I feel so much more confident now than when I came as a first-year student. Being able to work in so many positions and having all of these experiences, I feel so ready for my next step and to go out into the world.

"I had an incredible four years. I am so grateful and thankful I found St. Ambrose," she added.