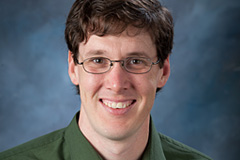 Some of Jim's more recent work has focused more on predictive modeling using machine learning. Machine learning is widely and increasingly relevant for business data analytics for things like targeted advertising (Google, for example) and suggesting content or products to consumers (Netflix, Amazon, for example). In Jim's research, he applies this technique for prediction to civil war, economic growth, and health care outcomes.

In his free time, Jim helps coach his sons' sports teams, is a Cub Scout Den Leader, and enjoys cooking.

Service to the University