Al Williams '78 will tell anyone that he's not a tennis player. Yet the man who still holds the St. Ambrose record for most points scored in a single basketball game (56) has embarked on a new mission with a different court.

"One of the most interesting things I have ever done in my life is that I created the E-Z Pop Tennis apparatus," Williams said.

"I didn't have a lot of excitement about how I was teaching my class," Williams said. "I wanted to keep their focus and attention. I started sketching things. How can I keep the kids motivated and focused, having fun, and at the same time learning how to play tennis?" 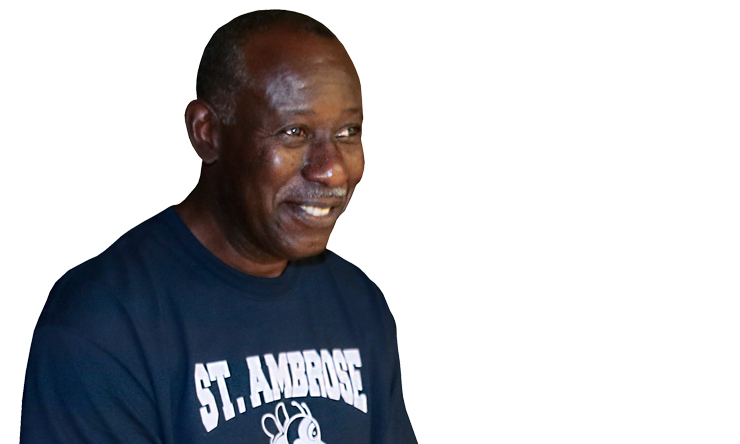 That goal covered two important areas of youth education for Williams: a desire to demonstrate an active lifestyle and introduce a new athletic option for kids in his home city of Chicago.

"This is one sport that is not overly saturated, and it's not available to kids in the inner city," he said. "I like to show them, here's another game. Not every kid is good at basketball, football, baseball."

The E-Z Pop system sets up with little effort and requires much less space than the traditional tennis court, an important factor for the areas and age group Williams targets with his program-children younger than 14.

"There are basically no tennis courts in many of the neighborhoods. We can take it to the playground, the basketball court, the rec center."

Adding a racket and tennis balls starts the game, where participants trade turns and attempt to stick the balls to the targets on the E-Z Pop screen. Games are scored like a regular tennis match.

"I use it for first-time learners," Williams said. "They can learn how to control the ball by hitting it softer. They're going to develop the power later. Right from the beginning we want them to aim small, miss small."

Williams, a self-proclaimed retiree, laughed about his second life as an entrepreneur.

"This is my new journey."

He's currently pursuing partnerships with the park district and the public schools in Chicago to spread the neon-green gospel with even more potential tennis stars.