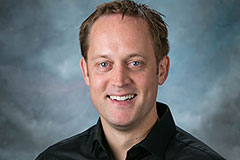 Nicholas Enz serves as the Director of Bands at St. Ambrose University, where he conducts the Symphonic Band and the Jazz Ensemble and teaches courses in music and music education.

Enz is an active guest conductor and clinician with appearances throughout the Midwest and Great Lakes region, including Michigan, Wisconsin, Indiana, Iowa, Illinois, Kansas, and Ohio.

Before joining the faculty at St. Ambrose University, he served as the Director of Bands at Michigan Technological University and taught in the Copper Country Intermediate School District.

Throughout his career, Enz has earned distinctions teaching at the college and high school levels. His high school jazz program received numerous awards and recognitions, including "Outstanding Jazz Ensemble" at the Northern Michigan University Jazz Festival and second place at the University of Wisconsin-Eau Claire Jazz Festival. The program also received eight grants from the Michigan Council for Arts and Cultural Affairs. The Michigan Tech Superior Wind Symphony embarked on six performance tours and was honored as an ensemble-in-residence at the Historic Ironwood Theatre. The 250-member Michigan Tech Huskies Pep Band was selected four times by the WCHA as the host band for the WCHA/NCAA Final Five Hockey Tournament. Enz received the 2016-17 St. Ambrose Faculty of the Year Award.

Under Enz's leadership, the St. Ambrose Symphonic Band traveled to Ireland in 2019 to perform on various stages, including the CIT Cork School of Music and the EPIC Irish Emigration Museum, and was the first band from the United States to be invited to perform with the Royal Irish Academy of Music Band on their season finale concert.

Dr. Enz served on the K-12 Music Curriculum and Standards Review Committee for the State of Michigan. He currently serves as the chair of the Iowa Bandmasters College Affairs Committee.