The Gift of Giving

Home The Gift of Giving

The Gift of Giving

The Future is Now: Donors like Jon Schroeder Helped The Building Our Future Campaign Exceed Its Goal

With the support of his parents, Jon Schroeder '17 built his future at St. Ambrose.

As he watched the priority project for the Building Our Future campaign rise from the ground throughout his senior year, Schroeder knew how he best could honor the sacrifices those parents, Jeff and Lynne Schroeder, made on his behalf.

Schroeder's pledge to assist in building the Wellness and Recreation Center, the largest capital project in university history, was one of literally thousands of donations that carried the campaign past its initial goal of $18.5 million.

When the campaign officially closed on June 30, a total of more than $19.7 million had been raised through the dedicated efforts of volunteer campaign leadership, committee chairs and Advancement staff. Primary to the success, of course, was the generosity of alumni, students, community supporters, faculty and staff.

Beyond its capital success, the campaign will be remembered for helping to ensure SAU's future by building a nationwide network of new and younger supporters.

"We are pleased and humbled by the eager response to this important fundraising effort," said Sister Joan Lescinski, CSJ, PhD, president of St. Ambrose. "We anticipated a lot of alumni support because, since I first became president in 2007, students regularly shared with me the need for a facility like this.

"Current students are making tremendous use of the building and, of course, we are so grateful to all of those who helped us build it-particularly to students and alumni like Jon, who came forward to help succeeding generations of Ambrosians have a great experience."

Schroeder said it is "kind of amazing" that future students will never know about Timmerman Field, on which the new building sits, and said "it is kind of a bummer" he didn't get to experience the center's many amenities as a student.

In the month following his graduation with a Bachelor of Science degree in Accounting, Finance and Business Economics, Schroeder wrote thank you notes to all who helped celebrate his success. He saved the final thank you for the two people who most helped ensure it, and included a copy of his donation pledge receipt and an explanation that the names of Jeff and Lynne Schroeder will have a permanent home on the donor wall in the Wellness and Recreation Center.

"I put in the letter I wanted to thank them because they were the ones who believed in me when I was an uncertain 18-year-old," he said. "I wrote that they helped pay for my tuition and were never on campus. I wanted a way for them to call St. Ambrose their home, like it had been mine."

Now an accountant at a firm in Moline, Illinois, Schroeder said his donation to the Building Our Future campaign also is a thank you for efforts the St. Ambrose faculty and community invested in his future.

"St. Ambrose was able to provide me with a wonderful education and that's something I will always be grateful for," he said. 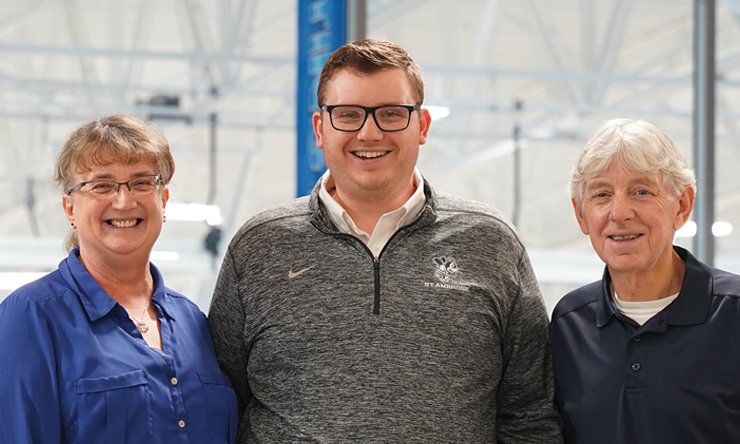