SAU senior Chemistry major Nick Schaffner discovered that behind taking a risk, there can be meaningful rewards – even ones that can save lives.

Schaffner spent last summer at a highly-competitive Colorado State University research program where he researched metal-organic frameworks (MOFs). These crystalline, porous materials made of metal ions and organic molecules may be effective in removing specific toxins from the human body, a potentially ground-breaking advancement in treating medical conditions and disease.

It was an idea that has not been widely researched, because MOFs are relatively new material.

Two years ago, Schaffner had a personal experience Schaffner's mother had a tumor removed from a kidney two years ago, and he knew then that dialysis cannot remove uremic toxins from the body because they attach to a protein. He created a metal-organic framework – one that was much cheaper to manufacture than one under study at Northwestern University – and found his crystal was effective in removing uremic toxins.

His research, supervised by a Colorado State graduate student, was published in late April in the American Chemical Society journal Applied Materials & Interfaces.

Shaffner's curiosity and comfort to ask "what if" was borne out by his St. Ambrose education where professors supported his quest. 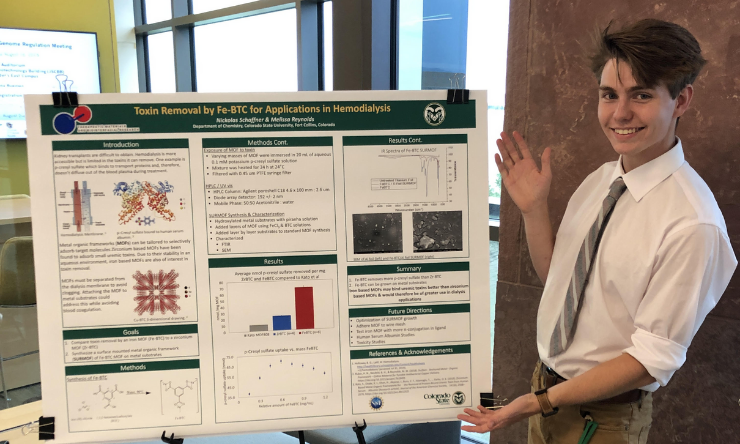 He came to St. Ambrose initially seeking a pre-med education, at first unsure if he wanted to major in Biology or Chemistry. He realized Chemistry was his strength and applied for the research program to make sure medical school was the next path he wanted to follow.

"The experience taught me I really enjoy research," Schaffner said, adding that he now plans to pursue graduate education in chemistry or biomedical engineering, followed up with a PhD program so he can eventually teach at the college level.

"Talking to people about research is the most enjoyable part," Schaffner said. "I have learned how important communication is in science. If someone takes the time to explain how it works in simple terms and why it might be important, it gets them more interested and excited about science."

At Ambrose, a recent class in physical chemistry – the relationships between matter and energy – sparked another new interest for Schaffner to pursue. "There are just so many topics I can see investing my life into studying," he said.

Human relationships played an equally important part in how Schaffner is benefiting from a St. Ambrose education.

"One of the things you learn at a smaller university is how important it is to build relationships, and the same is true in research," Schaffner said. "I had to build relationships with the people who were running the equipment I needed to do the research. The personal aspect of a small school is helpful, and you get a good balance of learning things yourself and learning when to ask questions."

Looking back, Schaffner no longer questions his abilities in science and research – even though at first he was surprised he was accepted to the research program.

"Once I got there I realized I was definitely qualified," he said. "I think students from small schools like St. Ambrose are exactly what they are looking for."