Art Leads to Healing and Growth for Two Honors Grads

The creation of art, no matter its form, is often influenced by lived experience. For Murphy Garcia '19 and Deone Danzy '20, it was heavily laced with loss.

Garcia's father, Tino, died of lymphoma when she was 16. During Danzy's sophomore year at St. Ambrose, his father, Dion, died suddenly. Each Ambrosian experienced and carried the grief differently, but in the classrooms and galleries in Galvin Fine Arts Center, with the constant support and encouragement of Art and Art History professors and close friends, they were able to process their pain and share their hope through art.

Garcia and Danzy were accepted into the Honors Art course in 2019. Both proposed to tie final senior projects to the loss they had experienced. The projects evolved to encompass the growth each experienced, as well.

For Garcia, growth took form in acceptance, reclaiming her identity and a celebration of what comes next in her life.

For Danzy, it was uncovering and sharing the light in his darkness and honoring everyone who helped him find it.

For these two now-alumni Ambrosians, art led to healing, and through their Honors Art projects, they unveiled their growth to the world.

'Where I Was Going'

There was a time when Garcia expressed her identity, and grief, in voice memos she recorded on her phone, within pages and pages of journals, and by replaying voicemails her father left her prior to his death in 2014.

She carried all of that with her when she arrived at St. Ambrose. Four and a half years later, she left campus carrying something new: acceptance.

"I didn't realize how much of my identity was rooted with my father and I feel like I really discovered myself," Garcia said. "For a long time in my head, I called myself 'the girl whose dad died.'

Looking back, I never want that to define me. His death changed me, and now I know how to frame and think about it in a different way.

"It needed to be about what came next, what happened after he died, and realizing that was part of my acceptance," she said.

Garcia, who graduated with Bachelor of Arts degrees in Book Arts, Art History, and Spanish, shared that journey through her Honors Art project: aceptación/acceptance. She created 23 abstract monotype prints that chronicle the life and death of her father, and the seven years following his death, ending on her 23rd birthday.

"I tell the story of three births, doctor's visits, and a death, but also the love, strength and growth that accompanies," Garcia said. "It was very symbolic of my desire to move on."

Despite getting noticed by faculty in one general education art class, it took time for Garcia to embrace her identity as an artist. Coming to St. Ambrose, she set aside her life-long love of sketching and crafting, and planned to major in engineering.

Garcia progressed through her first and second years on campus yet stalled in many ways. "I had to grow up real fast during my dad's illness and after he died. I think I did it in reverse. I grew up and I then went to college and realized I grew up too fast," she said.

"I was trying to figure out where I stood, my beliefs and all that other good stuff that forms a person's identity. I was very lost, and a lot of that had to do with the grief I was going through.

Figuring out how to deal with it was the most significant battle. It was constant, and I was like, 'go away,' but it would come and go as it pleased," Garcia said.

Her battle was further complicated because she didn't feel like herself in the engineering program. Her roommate encouraged Garcia to take another art class, and she enrolled in Joseph Lappie's papermaking course. "I was like, this is where I need to be. This is what I've been pushing away, and in my head, I knew it but I didn't want to accept it. I was stubborn," she said.

"Joseph sees something in students before they see something in themselves, and not just me, I've seen him touch so
many people. He is so proud of the art program and happy to share with students why art needs to be in their lives, in whatever way they want it to be," she said.

"On so many things he is informative, and he's also hilarious and honest. He is an incredibly honest man which is why I trusted his suggestion to give the program a chance, and he was so right," Garcia said.

Her Honors artist talk and reception was rescheduled from an in-person presentation in April 2020 to a virtual exhibit in May because of the pandemic, and she used the extra time to enrich her project, creating a video of the prints and layering it with voicemails from the past, snippets from the diary of thoughts and feelings she had recorded, family photos and music, all which celebrate the life of her father and her journey to acceptance.

"It gave me closure I had not addressed or at all attempted. I was like, this is the perfect ending and I was very content with it. I was graduating. I was closing a chapter. It lined up perfectly," she said.

The Art and Design Department recognized Garcia with the John Schmits Excellence Award in Art and her project was displayed in the Figge Museum of Art earlier this year. Garcia is now working as a freelance artist in Elburn, Illinois, and taking time to figure out where she wants to go next. "I am just having fun with it and putting my name out there, getting to know more people and seeing what else I can expose myself to and create," she said.

"The St. Ambrose community offered a lot. It was unreal, I connected with a lot of people, not only in what I'd been through, but in where I was going."

'A Thank You Letter'

Themes of progression were threaded throughout Danzy's upbringing: a family-wide focus on self-growth, continuous improvement, and finding good in every situation. "It was always something that has been a part of me, but I think it was amplified after the death of my father," he said.

That was the turning point for Danzy who, after losing his father in 2018, spent his final two years at St. Ambrose in introspection and wholly infusing those threads of progression into his life and art. He unveiled his growth, as a person and an artist, within his Honors Art project, Take Care.

Danzy graduated in 2020 with Bachelor of Arts degrees in Graphic Design and Art History and is interviewing for positions while also working a freelance graphic designer in Chicago. He left campus transformed. As a first-year student, he wasn't seeking a college experience. Danzy only wanted a lucrative career. For him, art wasn't personal; it was business. He had no plans to become invested in the community of SAU. 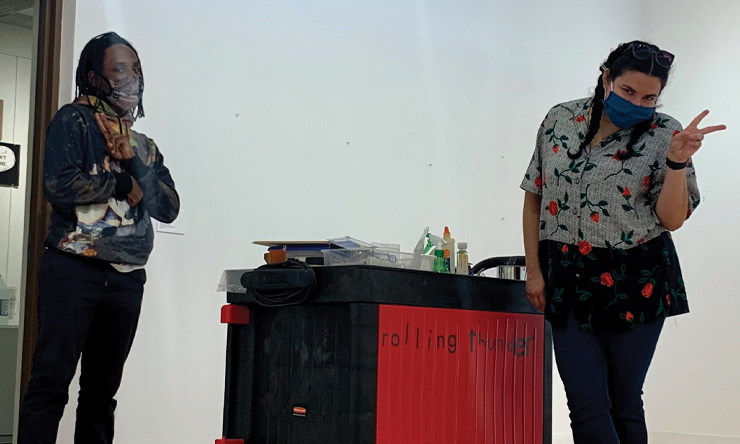 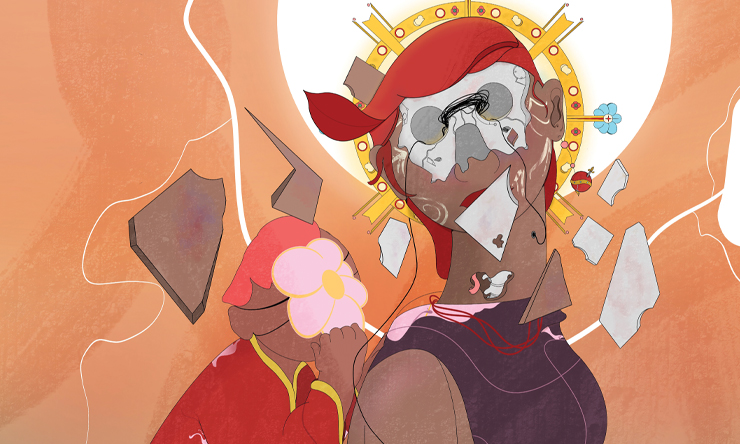 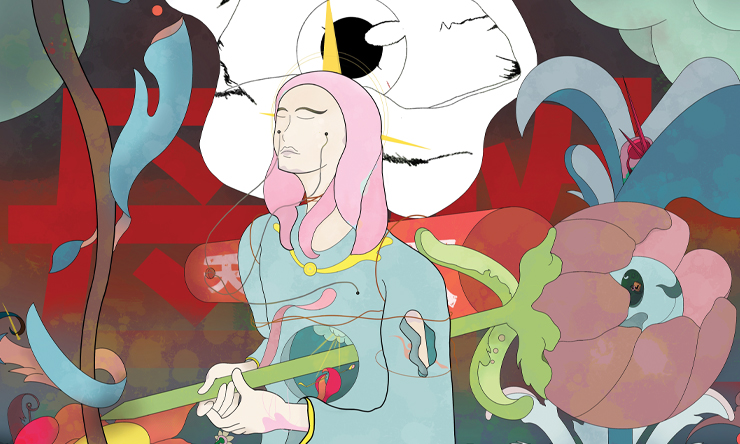 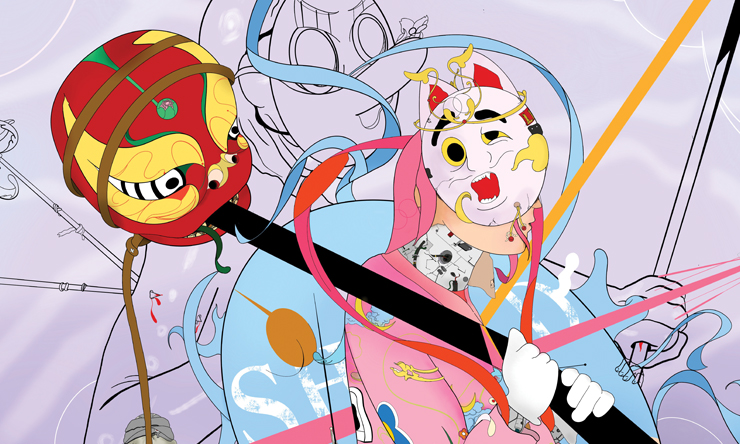 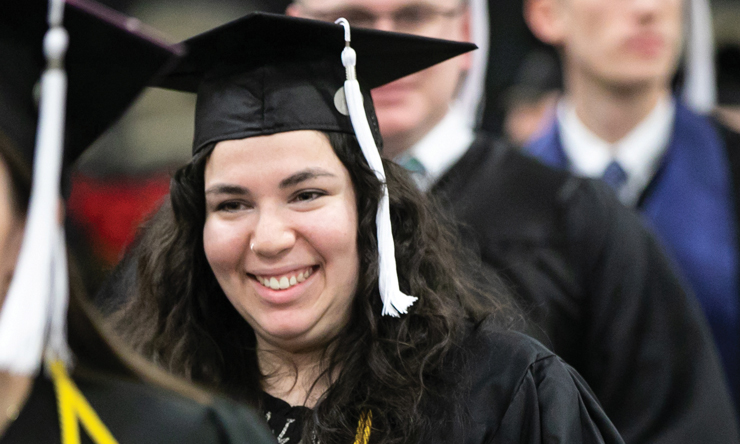 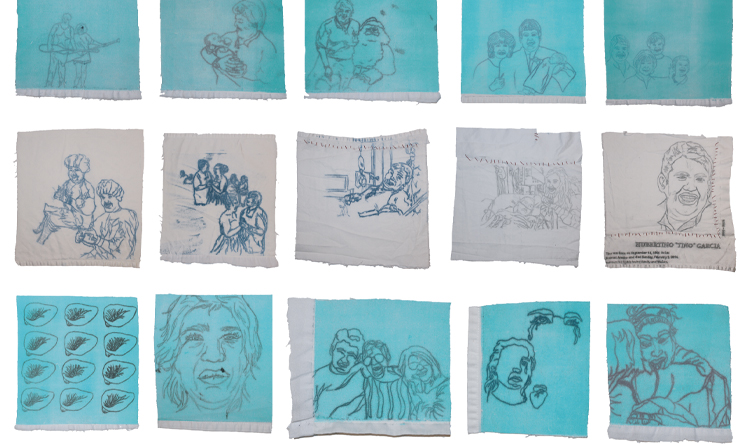 With the constant support and encouragement of Art and Art History professors and close friends, Deone and Murphy were able to process their pain and share their hope through art.

After his father died, he spent two weeks with his family in Chicago. When he returned to campus, he decided, "OK, now it is my turn to lead the way. I started taking my art a bit more seriously. It became this journey of figuring out who you are as a person, no matter what happens, reflecting on the passing of my father, and finding my own style as an artist," he said.

The result of that journey was a series of digital illustrations inspired by the process of death, life, and rejuvenation, and the impact of each on his identity, Danzy said. The illustrations were displayed in the Catich Gallery in 2020, and at the Figge Museum of Art earlier this year. And the St. Ambrose Art Department recognized Danzy with the Graphic Design Award.

Danzy said the Art and Art History faculty offered their expertise and most importantly, the freedom, to experiment and establish his artistic voice. "The sheer amount of knowledge and experience the faculty have, and the creative freedom they allow you to have, regardless of if it's different from their ideology or morals, they let you go ahead and find a way to express it. They create a freedom where, if you can think of it, you can find a way to execute it," he said.

"And then if a mistake happens, they will be helpful and supportive about it, but they will let you know that 'Hey, you broke this. Can you find a way to fix it or come in after hours and I will show you how to fix it?'"

Danzy became more involved after his father's death. While lending his graphic design skills to SAU Dance Marathon, he fully committed to doing anything he could to help the kiddos. He was president of the Art History Club, attended movie nights and events, and made close friends. "The process of becoming embedded in the community was natural," he said.

As Danzy got closer to completing his Honors Art project, he realized it was much more than a personal commentary; each line, symbol and reference in his work illustrated his growth at SAU and could be tied back to a professor, friend, class, activity, and even work study, he said. His project honored all of the Ambrosians who provided him with the skills to express himself, and the emotional tools to find joy in darkness.

"It reflected a combination of things I've learned at St. Ambrose. My whole outlook changed dramatically over the course of two years," he said.

He said his Art Honors project became more of a thank you than a reflection on all the dark moments.

"Who knows if the friends I made after my father passed, any of the relationships I gained after that situation happened, if any of that would have been possible if I just focused on all the darkness of it all," Danzy said. "The way I now approach my freelance work and my personal art would not be possible without the experience of St. Ambrose. What I've learned has already improved me and will probably have a huge effect on me in the future."

All artist images on this page are All Rights Reserved.

Welcome Week 2021: This Is When The Magic Happens

SAU's plan to return to "responsible normalcy" will allow large gatherings during Welcome Week 2021, and organizers are exited to roll out the academic year with events showcasing all of the opportunities available to new and returning students.

SAU’s 13th President Will Complete Her 14-year Term on August 6.

A recently-established endowment, funded by faculty, staff, alumni and friends of the Physical Therapy Department, is helping students achieve their educational and professional goals.