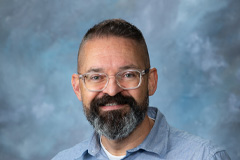 Dean of Students | Assoc. VP for Academic and Student Affairs

Christopher Waugh returns home to the Quad Cities after spending several years at Pomona College in Claremont, California, first as Director of the Smith Campus Center and then as Dean of Campus Life.

He grew up on a farm near Neponset, Illinois, and attended Neponset and Kewanee public schools. Christopher earned a bachelor's degree in English and a master's degree in Counseling at Northern Illinois University where he worked in various capacities in the residence halls, coordinated conferences and events for the university, and taught undergraduate courses in leadership development and career exploration.

While at Lake Forest, he worked closely with the campus community to build a co-curricular model that continues today. In 2011, Christopher completed a Ph.D. in Higher Education Administration at Loyola University Chicago, where he also led graduate-level internship cohorts. His research and educational interests focus on engaging bystanders to help mitigate dangerous drinking situations. His work at Pomona College included community development in the residence halls as well as extensive bystander training and education, as well as policy development related to alcohol and other drug use.

Christopher is married to Kristina, a health educator, who recently completed a master's degree in management and human resources at the University of LaVerne. Kristina and Christopher have one son, Simon.