The St. Ambrose University College of Health and Human Services and the College of Arts and Sciences honored five alumni on Sept. 20 for their professional innovation and enthusiasm, and for the many ways they embody the university's mission through outstanding leadership, scholarship, and service.

Each recipient was nominated by a faculty member who noted how these Ambrosians elevated their professions, communities, and alma mater.

College of Health and Human Services

Adam Haut '08 received the Distinguished Alumnus Award. After earning a Bachelor of Science degree in Nursing he began his career in the emergency department. Early on, he led mentorship programs, shared governance committee work and precepted new RNs and EMTs. He became Medforce trained and provided critical care during aeromedical transport.

Haut took on higher leadership roles, first as the director of nursing of a visiting nurse organization and then as a nurse manager of a community hospital emergency department. He improved care by implementing evidence-based practice; serving as chair for multiple quality and educational committees; and as a leader for mass casualty incident protocols within the community. Haut is a FEMA certified instructor for the Center of Domestic Preparedness and an ALICE instructor.

"He has not forgotten his roots," said Clinical Associate Professor Ann S. Garton, '12 MSN, RN-BC, who nominated Haut for the award. He serves on the SAU Nursing Department advisory committee and Health Science advisory panel, and is an active community volunteer, too.

"I have personally worked alongside Adam in community and work initiatives. He is always a positive and transparent leader. He encourages others to enhance their skills and assists them to be the best individuals personally and professionally. Adam is truly an Ambrosian and leader in every possible way," Garton said.

"She was active in the Student Physician Assistant Society and participated in a number of community service events including Habitat for Humanity, organizing a blood drive, and assisting in the Bix health tent," said MPAS Program Director and Assistant Professor Kerry Humes, M.D., who nominated Schroeder for the award.

"Maddie has continued her service to the community in the early years of her career. She has gone to Haiti twice: once for a week, and the following time for a month with ServeHAITI, an organization that helps provide medical care and clean water to the citizens of Haiti. Her obstetrics experience there has impacted her career as well. Based on her experiences delivering babies in Haiti, she has decided to apply for a post-graduate residency in obstetrics," Dr. Humes said.

"Her early and continued dedication to service clearly reflects the traits of an Ambrosian. We are proud to have had her as a member of our inaugural class and look forward to seeing what she does as she progresses in her career," Dr. Humes added. 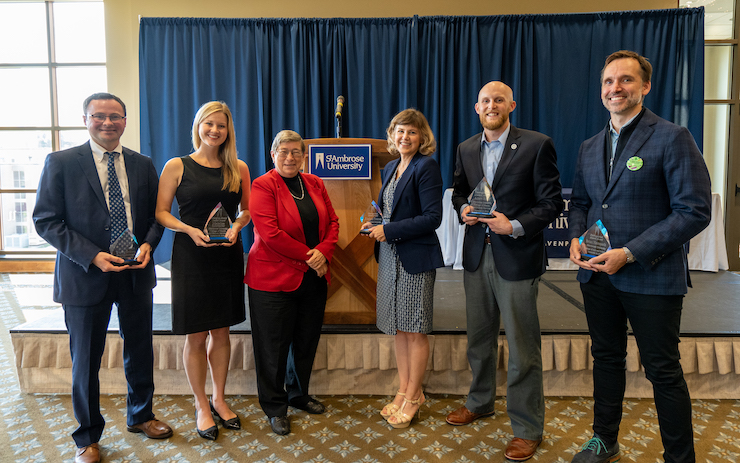 College of Arts and Sciences

Brian Hemesath '94 received the Distinguished Alumnus Award. He followed his Bachelor of Arts degree in Theatre from St. Ambrose with a Master of Fine Arts from Carnegie Mellon University, and quickly established himself as a leader in costume design.

Hemesath designed costumes for Saturday Night Live for 14 years, for Honeymoon in Vegas on Broadway, and currently designs costumes for Sesame Street's "Human Department" His work on Sesame Street earned him five Emmy nominations and two Emmy Awards. He also has worked on movie sets and currently is the assistant costume designer for a Steven Spielberg's film remake of West Side Story.

Nominated by Theatre Professor Cory Johnson, PhD, she said Hemesath is an artistic visionary who engages his colleagues and carves out a path of action that gets everyone on board. "In his field of costume design, each job is an audition for the next. Brian is in great demand at the highest level of his profession," she said.

And, he continues to honor his Ambrosian roots. Hemesath has donated countless hours and materials to SAU productions and volunteered to guest design and build costumes for his alma mater, Johnson said. His work was on the Galvin stage in Tartuffe (1999 and 2019), Gypsy, and the most recent production of You Can't Take It With You.

"Brian is a remarkably talented and driven individual," Johnson said. "He also is a warm, caring and giving alumnus. He has never lost contact with his former home here at SAU. He has taken our students on tours of SNL and Sesame Street when they have been in New York City. He has returned to Davenport to offer master classes for the currently enrolled costume design students, and he is always an eager resource for SAU and the Theatre and Art Department," she said.

Alex Cahill '08 received the Emerging Leader Alumnus Award. He entered law school after earning a Bachelor of Arts degree in History and is now an attorney with the Rock Island Arsenal.

Nominated by Associate Professor Ethan Gannaway PhD, he said Cahill remains faithfully committed to SAU. He attends events and lectures, serves as a History Day judge, and once, after speaking to history students about life after graduation and career paths in law at an alumni event, he exchanged emails with several students and continued to offer advice, Gannaway said.

Cahill is a longtime supporter, and current advisory board member, of the Academy for the Study of Saint Ambrose of Milan. He regularly attends events, including colloquia and lectures, and twice joined Rev. Bud Grant's alumni trip to Italy. In addition, he supports the university and ASSAM through regular donations, Gannaway said.

He added that Cahill has demonstrated a "consistent and deep commitment to St. Ambrose University. I cannot think of a better candidate."

Tinsman launched the company in 1992, less than a year after the Internet became available to the public. Today, Twin State employs more than three dozen engineers and programmers who serve 300-plus local and regional commercial and non-profit customers.

"At one end of the spectrum, Beth has worked with Bettendorf High School to connect students with local professionals. At the other end she recently co-hosted the ‘Executives Club - Cyber Security Readiness' for presidents, CEO's, and executives," Lillis said.

Tinsman maintains a close relationship with the university, students, and CIS department, even serving as an SAU adjunct professor so she can pass on her IT experience to the next generation, Lillis said.