The best kind of learning is a two-way process.

When five members of the Marketing Strategies course taught by Professor John Byrne, PhD, took on the task of helping one of the most well established road races in the Midwest tap into new means of marketing this past spring, they taught as well they learned.

“It’s great and it’s exciting,” Juehring said. “There is part of you that doesn’t want to admit that you don’t know these things, but we don’t.”

As the race builds toward its milestone 45 th start on July 27, it ranks among the most well marketed, single-day sporting events in the United States.

Ed Froehlich is the outgoing director who built the seven-mile run through the intimidating hills of Davenport into the largest non-marathon race in the Midwest, using old-media marketing techniques. He partnered early on with the largest daily newspaper in the Quad Cities and then the largest TV station to help the race grow from 87 runners in 1975 to more than 18,000 participants at its peak.

But as Froehlich prepares to hand the reins to Juehring, a new generation of athletes is far more likely to learn about an event on their mobile phone than via pages in a newspaper or even advertisements on television.

The SAU students created the race’s first Instagram account, built several kinds of social media posts and created a content calendar to help roll out the race to a digital audience as the end of July event draws nearer.

“That’s a demographic I think we have the potential to reach in new ways,” Juerhring, a marketing professional for most her career, said of the 20-somethings. “I’m 50-something and I don’t know all those ways. I was excited when John asked us to participate in his class project.”

The Bix 7 is one of five businesses/enterprises that provided real, practical marketing projects to Byrne’s Marketing Strategies class, and, in turn, were aided back.

Byrne said the experiential learning piece has been part of his curriculum for five years. “Every semester is a new experience,” he said. 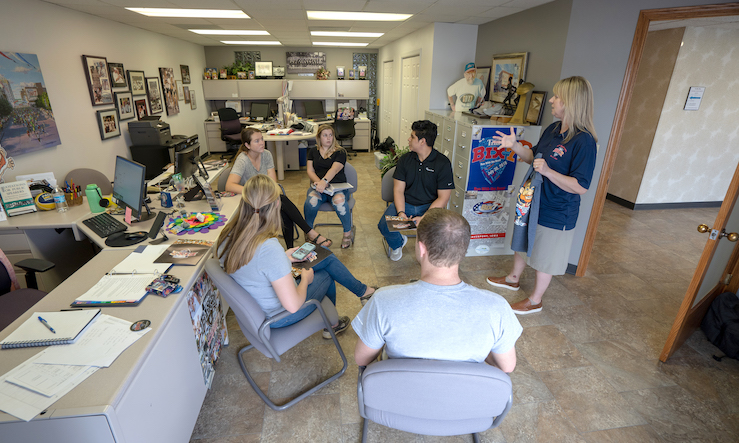 Increasingly, it’s new on both fronts. The advent of digital marketing has flipped the marketplace and made experienced business folks who didn’t grow up with digital technology just a little more open to learning from students who have.

And it’s not just about digital. Although she is a mother of teens, Juehring was unfamiliar with the popularality of stickers for water bottles and laptops across college campuses. She took the SAU students at their word that this was a good means of outreach and ordered 500 stickers.

Weeks later, “Michelle sent us an article from her son’s school newsletter about stickers,” said Verdun. “Seeing that article made it less of leap of faith. There’s always room for teaching. Michelle has expressed how she loves learning new things.”

Again, though, the learning is a two-way process. The SAU students have learned a great deal about interacting with clients, how to order marketing materials through trade shows, and about the impact of sponsorships.

Verdun found herself calling on lessons learned through the Bix 7 experience while interviewing for jobs ahead of her forthcoming graduation.

“I definitely think it’s beneficial,” Kalin Burke said. “I’m a strategic communications major, but this class has made me like marketing even more.”

Jean, who plans to return to the Chicago area after graduating, is a golfer not a runner. But she said the experience has helped her love the Bix.

“I’ll definitely be back,” she said of the end of July road race. “We have been working on this all semester. I want to see how it turns out.”

St. Ambrose was approved to purchase and distribute laptops, internet hotspots, and other technology through the Governor's Emergency Education Relief (GEER) Grant. The equipment will be loaned to Pell-eligible students without computer or internet access.

Ryan Saddler, Associate Vice President for Diversity, Equity and Inclusion, and Director of the Accessibility Resource Center, will be the Commencement speaker at the 2020 Winter graduation ceremony for undergraduate students on December 19. 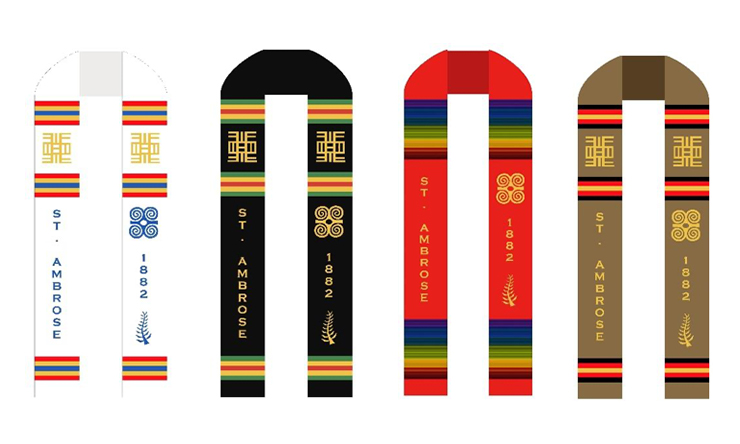