As St. Ambrose's leader, Sister Joan is committed to the success of the University, and its faculty, staff and students. A long history of working with private, Catholic institutions has allowed her to work with campus constituencies to enhance the Catholic intellectual tradition at the University. 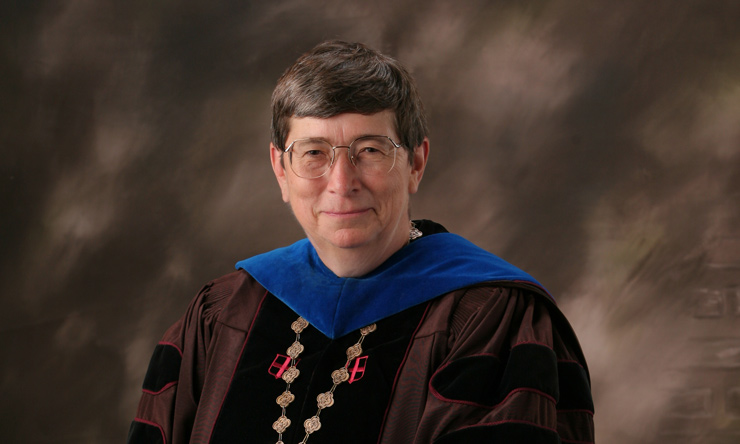 Sister Joan Lescinski, CSJ, PhD, became the 13th President of St. Ambrose University in August 2007. In the Quad Cities, she is currently a member of the Quad Cities Chamber of Commerce Board of Directors, the Regional Opportunities Council and the Putnam Museum Board of Trustees. In March 2011 she received the Athena Award for leadership given by the Women's Connection of the Quad Cities.

Read the rest of her biography below.

From 1998 to 2007, Sister Joan served as president of Saint Mary-of-the-Woods College (SMWC), then the oldest Catholic liberal arts women's college in the country. During those years she led the college to record gains in enrollment, facilitated the development of institutional strategic and master plans, and introduced several undergraduate and two new graduate academic programs.

A native of Albany, New York, Sister Joan earned a doctorate in English literature from Brown University in 1981. She received her master's and bachelor's degrees in English literature from the College of Saint Rose in 1974 and 1970. Sister Joan holds certificates in Fund Raising Management and Educational Management from Indiana and Harvard Universities, respectively. She has been a member of the Sisters of St. Joseph of Carondelet, St. Louis, Missouri, since 1965.

Sister Joan is a member of numerous professional organizations, including the Council of Independent Colleges Presidents' Association, the Midwest Modern Language Association, and the Association for Religion and Intellectual Life. She has presented and published numerous papers and articles; has been an invited participant at the Oxford Roundtable and engaged in several consultations sponsored by the PEW Charitable Trusts; and currently serves on the Board of Trustees of the College of Saint Rose in Albany, New York, Mount St. Mary's University in Los Angeles, and the Board of Directors for a senior living complex, Shaker Pointe, in Latham, New York. She served from June 2011 to September 2019 on the Board of the Higher Learning Commission (HLC), and she serves on the Tax Committee of the National Association of Independent Colleges and Universities (NAICU). She was elected to the Board of Trustees of the Association of Catholic Colleges and Universities (ACCU) in January 2015.

Among her personal pursuits Sister Joan enjoys organic gardening and art appreciation. She also enjoys flying and has flown with the Navy's Blue Angels and the aerial demonstration team, The Red Barons.

Sandra Cassady, PhD
Vice President, Strategic Initiatives
Sandra Cassady oversees the planning and development of new academic programs. A licensed physical therapist, Cassady joined the St. Ambrose faculty in 1994. She holds the rank of full professor, serves as dean of the College of Health and Human Services and oversees academic advising. Her prior administrative roles at St. Ambrose include serving as director of the Physical Therapy Department, associate dean of the college, and associate vice president for academic affairs. She serves on the Board of Directors of the United Way of the Quad Cities, and the Quality and Safety Committee of the Genesis Health System board. 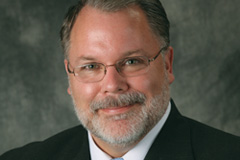 Paul Koch, PhD
Provost and Vice President, Academic and Student Affairs
Paul Koch began his St. Ambrose career as an assistant professor of psychology in 1988. He has since served as department chair, director of general education, dean of the College of Arts and Sciences, and associate vice president of academic affairs, assessment, and institutional research. In his role as vice president for academic and student affairs, Koch oversees the academic colleges, student services, the library, and several other academic areas. He is a member of the board of the Community Foundation of the Great River Bend and the Robert Young Center. He was elected in June 2019 to the Board fo the Higher Learning Commission.

He earned his bachelor's degree from Morningside College and his master's and doctoral degrees from Iowa State University. Paul and his wife, Sherree, have two daughters, a son, and eight grandchildren. 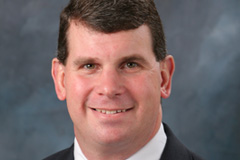 Michael Poster '88
Vice President, Finance
Michael Poster is a Davenport native, who graduated from St. Ambrose University with a bachelor's degree in accounting in 1988. His professional career experience includes three years with KPMG and 17 years with McGladrey and Pullen, working primarily in assurance and financial management consulting. During this time he worked with numerous higher education clients.

Poster joined the administrative staff of St. Ambrose in 2008. He manages the general accounting, human resources, physical plant, student accounts, and information technology offices. He also oversees the compliance area, the university's bookstore operations (through Follett Higher Education Group), and the food service (through Sodexo). He is on the board of Family Resources and the Downtown Davenport Partnership, and serves as the chair of the finance committee for both organizations. Mike and his wife, Kelly, have a son and two daughters. 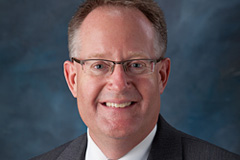 James Stangle '82
Vice President, Advancement
James Stangle, a graduate of the Class of 1982, earned his bachelor's degree in business administration and mass communication from St. Ambrose. He began his professional career at his alma mater, serving as assistant director of development from 1982 to 1985. His subsequent career experience included serving in a variety of advancement roles for institutions such as Assumption High School, Marquette University, the Mayo Clinic, and Duke University's School of Medicine. Most recently, he was the vice president for institutional advancement at Notre Dame College Prep, Niles, Ill. Stangle returned to work at St. Ambrose in 2012. In his current role he manages the university's advancement activities, including capital campaigns, the annual fund, major gifts, planned giving, and alumni relations.

Stangle earned his master's degree in broadcast and electronic communication from Marquette University. He serves as a member of the United Way marketing committee.

Rev. Aloysius Joseph Schulte, 1882-1891
Schulte was the first priest that Bishop McMullen ever ordained. After ordination, Schulte worked as a cathedral assistant for a few years before he was slated by McMullen to organize St. Ambrose College. The school had 40 high school students during the first year, and 85 students when he left. During Schulte's presidency, the central portion of Ambrose Hall with the tower was built, although Ambrose Hall was originally only two stories high. After leaving St. Ambrose college, Schulte took a pastorate in Iowa City.

Rev. John Thomas Aloysius Flannagan, 1891-1906
Flannagan was born in Haverville, Massachusetts, and was the second priest on faculty during Schulte's duration as president. While being president of the school, Flannagan's sister Editha ran the Immaculate Conception Academy. The two worked together on many events between schools together. Flannagan promoted boys choir and Latin on campus, and went to the Sacred Heart parish after his term as president. He died January 26, 1926.

Rev. William Shannahan, 1906-1915
Born February 2, 1870, Shannahan, referred to as "Big Bill," was raised in Williamsburg, Iowa. He was the college's first captain of the football team, and graduated from the institution in 1896. He worked in the philosophy department before taking his role as the third president. During his term, the east wing of Ambrose Hall was built, which contained an auditorium, classrooms, and living quarters. After leaving St. Ambrose, Shannahan pastored in Iowa City, until he was named Sacred Heart pastor and Vicar General of the Diocese of Davenport in 1932. He died October 22, 1937.

Rev. Ulrich Hauber, 1926-1930
Born June 28, 1885 in Bavaria, Germany, Hauber graduated from St. Ambrose in 1905. After his ordination in 1908, Hauber joined the faculty, which he served as a member of for 48 years. A nationally known biologist, Hauber was the author of many textbooks, pamphlets and articles. At St. Ambrose College, Hauber was the chairman of the Division of Natural Sciences before becoming the fifth president. He died July 1, 1956, and was the first person to be laid to rest in the Chapel of Christ the King.

Rev. Martin Cone, 1930-1937
A Clinton, Iowa native, Cone was a social worker who taught social sciences at St. Ambrose for 16 years before becoming president. He is credited with building the faculty, taking over at a time when priests were paid $15 a month for teaching. Cone also instituted summer sessions on campus. After his presidency he was appointed to the Pastor of Sacred Heart Cathedral, and Vicar General of the Diocese of Davenport.

Rev. Carl Meinberg, 1937-1940
Born January 11, 1889 in Keokuk, Iowa, Meinburg graduated from the college in 1911. He became a member of the St. Ambrose faculty after his ordination in 1914, holding a variety of positions on campus. In his early years, Meinburg served as the head of the library, and was also the director of the choir and the orchestra. He taught in the departments of religion and Spanish, and eventually became the head of the history department and the campus spiritual director before becoming the seventh president of the institution.

Rev. Ambrose Burke, 1940-1956
Ambrose Burke was an English scholar with a Yale doctorate. During his term as president, St. Ambrose built an administration building and Christ the King Chapel. Dealing with many issues surrounding the war, Burke was able to temporarily peak enrollment between 1500 and 1600 students. At one point, Burke also delivered a three-part series during the Catholic Hour on NBC entitled, "Sainthood, the Universal Vocation." He left St. Ambrose after being appointed to St. Mary's Parish in Clinton, Iowa.

Rev. William Collins, 1956-1963
Referred to as "Sailor Bill" since had served in the Navy, William Collins became St. Ambrose's ninth president. From Millersburg, Iowa, Collins graduated from St. Ambrose and had been at the college for 27 years before his appointment. He was chairman of the business and economics departments on campus before becoming president. Hoping to get the school back on track financially, Collins raised tuition and temporarily dropped the football program. During his term, East Hall (Rohlman) was constructed. Collins was active in the American Legion and helped found the Council of World Affairs.

Rev. Sebastian Menke, 1964-1973
Born December 21, 1910, Menke graduated from St. Ambrose in 1934. After his ordination in 1938, Menke returned to St. Ambrose and taught Latin, German, Greek, ancient history and astronomy on campus. He then became the rector for East Hall. Menke served as president during a time when struggles were high for private colleges. During his presidency, South Hall (Cosgrove), Hayes Hall, and the fine arts building were all constructed. After leaving the presidency Menke became the pastor of Sacred Heart Parish. He died April 21, 2002.

Dr. William Bakrow, 1973-1987
William Bakrow was born in Kansas, but moved to Rochester, New York when he was one-month old. He received a doctorate in public administration and education from Indiana University at Bloomingtom. He was given the friendly nickname of "Dollar Bill," since he wiped out a $2 million debt, doubled enrollment, and balanced the budget for eight consecutive years. Under his presidency St. Ambrose ventured into graduate studies with the MBA program. Bakrow was the first layperson to serve as chief operating office at St. Ambrose. He died March 17, 2005.

Dr. Edward Rogalski, 1987-2007
Edward Rogalski came to St. Ambrose as dean of students in 1968. From 1974 to 1980, Rogalski was St. Ambrose's vice president for administration, and from 1981 to 1986, the institution's senior vice president. He served as executive vice president at the time of his appointment to the presidency in 1987. During Rogalski's tenure the university increased total enrollment by more than 70 percent, added nearly 40 additional academic programs, conferred more than 11,000 bachelor's, master's and doctoral degrees, and completed 15 new construction or major renovation capital projects totaling more than $67 million.